Today is 15th March 2016.
It is 5 years since Chris Henry cut the last small tumour out of my shoulder.

The cancer industry has this weird definition that even if you still have cancer tumours, if you are alive after 5 years you are counted as cured.
When it seemed that what I was doing might actually work, I took on the higher level of definition, of claiming cure after 5 years of being tumour free.

Today is that day.

A time for celebration.

A time for declaration.

A time of commitment.

Here are a few images from the journey.

One from 15th March 2016 – outside the Pier Hotel Kaikoura, where Ailsa and I went to lunch.

Outside the Pier Hotel Kaikoura, on the way to a celebratory lunch with Ailsa. 15 March 2016

In July 2008 I noticed a small lump on my temple, and in August the wider excision happened.

This one shortly after that second operation.    I thought about making up a set of LEDs powered by little flat batteries, to give  Borg look to the hole, but the surgeon told me it would fill in quite quickly, and he was right about that.

The wider excision of my first melanoma August 2008

In May 2010 was the big operation, cut from above ear to shoulder, with most of my left side neck, facial and shoulder muscles removed. 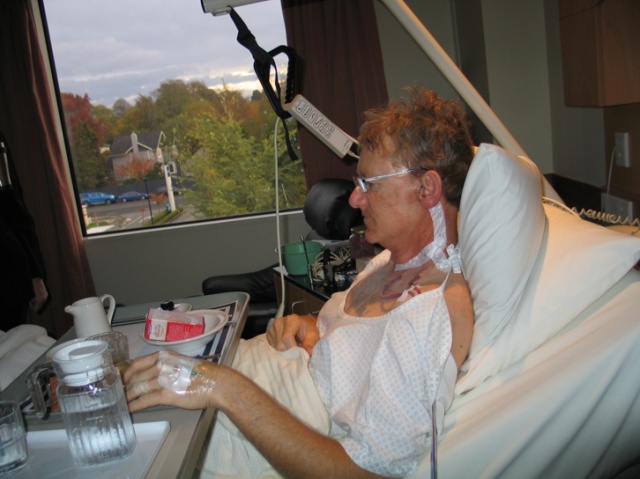 The big operation – 6.5 hours, from above ear to chin to shoulder – everything that could be taken cut out.

A week after the operation came the news – sorry – the cancer has gotten away in your liver, there is nothing more we can do for you except manage the pain.

A lot of reading, a strict vegan diet, high dose vitamin C, and the tumours all went.
Relaxed the diet for a couple of days and there were more tumours – another operation – more destruction of facial nerves.

The last time I relaxed the vitamin C was in Feb 2011.
15th March 2011 was when Chris cut the last tumour out. The histology was done the following day. 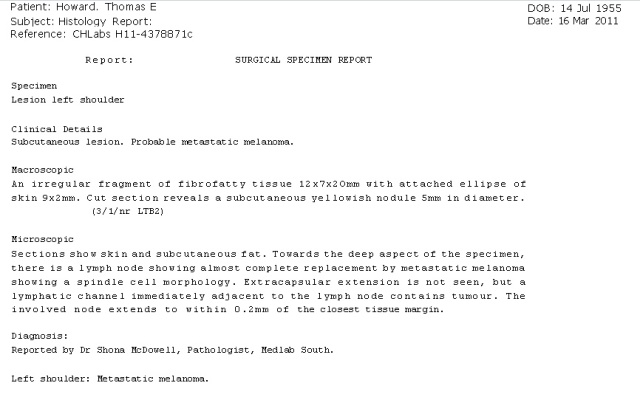 Twice in the last 5 years I have let the time between vitamin C doses get out to 20 hours, and most days it has been 12 hours +/- 3 hours.
Every day I have had at least two doses of vitamin C – a heaped teaspoon in a glass of water (mostly luke warm).

I have stayed vegan, or at least made my best efforts to.
When away from home, I have sometimes bought food which the seller has assured me was vegan, but I could tell from the reaction of my body when I ate it that it contained animal products (usually mayonnaise).

There is just so much evidence now, from so many different sources, that the risk of cancer can be dramatically reduced by being vegan – by a factor of 3 or more.
Nothing in biology (or life) is 100%, and I am so much healthier now, than I was before the cancer, that it is just astounding to me what our society allows.

It is clear to me, beyond any shadow of doubt, that we allow money to rule.
Cheating strategies dominate our culture at all levels.

We could easily supply everyone on the planet with fresh wholesome vegan food, yet we allow marketing companies to tell half truths in a way that makes them complete lies, and encourage people to make themselves sick, then have a sickness industry that maintains their ill health with pills and potions, rather than changing diets and behaviour to promote good health.

At so many levels, our society is a set of lies and cheating strategies.

We are a fundamentally cooperative species.

We are each far more cooperative than we are competitive, and we can each compete, and compete hard, if we need to.
What any human being gets to be is very much a function of the context within which we find ourselves.

We have amazing automation technology that we could easily turn to developing technologies for the automated production of fresh food, clean water, solar energy, safe housing, advanced health-care, communication, education and transport, to every person on the planet.
That is simple – technically.
It is just almost impossible to imagine if one is living in a world defined by money – which is a scarcity based measure of value.
Today I am five years clear of cancer, yet the cancer of money and markets still dominates the body of our society.

Cancer is nothing more that an element of a cooperative (the cooperative cells of a human body) taking resources from the whole for the exclusive use of themselves without regard to the impact on the whole (or the long term impact on themselves – cancer is a very short term and dead end strategy).

If that is not an accurate description of the incentive structures present in a market based economy, then I don’t know what is.

Things that are genuinely abundant in a market have no value, however important they are.

That is not how our bodies work.
The cooperative that it the vast collection of human cells that makes up each and every one of us works at many different levels to ensure that every cell has all the air, water and food it needs.
That is basic – it is breathing, drinking and eating.
That is survival 101 for bodies, and all the cells within – every cell.

As a society, we don’t do that.
We pretend that making each cell compete for survival is natural.

It is a distortion of biology and evolution.

Cooperative life forms work together to ensure all have what is essential, and all have the freedom to do whatever they choose within the context of the needs of the group as a whole.

Not some childish following of whim.
Freedom is about acknowledging the context of the needs of all others in the group.
Freedom and responsibility are two sides of the same coin in this sense.

Our society needs to be like our body, and ensure the life and liberty of every cell (every person), no exceptions.

I managed to survive the “terminal cancer” that was present in my body by choosing to over-ride all the wants and desires that my body had learned.

I did that because I had (and have) evidence, beyond reasonable doubt, that it was required for survival.
I am alive.

I make the declaration, that I am committed to creating a world in which every individual, no exceptions, experiences having all the necessities of life being met, and to the degree that they acknowledge and accept the responsibilities of living in a complex and diverse society, that they also experience such degrees of freedom of choice and movement and resources (within the reasonable limits of the needs of the wider ecosystems within which we exist).

We live in a time of exponential development of technology, but the delivery of the benefits of that technology has been and is being constrained by the needs of capital to make profit.

The needs of capital completely dominate the needs of people in today’s world.

Our job, is to empower a safe transition to a state where the security of individuals and the freedom of individuals to self actualise in whatever way they choose, is dominant.
People need to experience security to do that.

Market systems deliver such security to very few (if any), and most of those who currently think they have security are deluding themselves in quite profound ways.

I am not for one instant proposing any sort of equality of outcomes.

I am quite explicitly proposing a vast diversity of outcomes, that is delivered by supplying every individual with the material needs to do whatever they reasonably choose.

And there is that test of reasonableness.
And that test will vary between communities.

And provided that every community has at its base the fundamental commitment to value life and liberty of all individuals, then there can be security in such diversity.

We have such ability to produce, that there is no need to take anything from anyone.
There is no need for any to fear material loss in this process (only the loss of control over others – which was mostly illusion anyway).

Our ability to automate processes is more than doubling every year.

It is 42 years since I started working with computers, and thirty years since I started the software company I still run.
The cell phone I now use has over 30,000 times as much storage, runs a thousand times faster, is a millionth the size and energy consumption and costs less than a thousandth as much (in inflation adjusted dollars) as the first machine I worked with.

Some few things have gotten cheaper, but the general lot of the average person has not improved significantly. In fact rates of heart disease, diabetes, cancer, are all increasing.
Security if not actually decreasing, is not improving at anything even remotely approximating what technology makes possible.
Financial systems have destroyed the security of many, and continue to do so.
It is increasingly difficult for most to get a job (particularly the young), and most people face lives with little real possibility.

Rather than experiencing greater material security, most people face less security, greater insecurity.   In most western societies one in five people are now on anxiety medication of some sort.

Money!
The notion of capital, outside of ideas of a cooperative social context, is cancerous. It promotes growth of a subset at cost to the whole (and to the long term detriment of even that subset) – the definition of cancer.

The incentive system is inbuilt in a system that bases value on scarcity.   Scarcity based measures cannot give a positive value to universal abundance.   Every person needs an abundance of the essentials of life.  Money and markets cannot, even in theory, provide that.

We can change that.

We must change that.

Nothing could be more important, for us, and for whomever exists in whatever future we are part of creating.

Seems like I might be a cancer survivor. Thinking about the systemic incentives within the world we find ourselves in, and how we might adjust them to provide an environment that supports everyone (no exceptions) - see www.tedhowardnz.com/money
View all posts by Ted Howard NZ →
This entry was posted in diary, Ideas, Nature, Our Future, Philosophy, Technology and tagged Abundance, cancer, cancer success, Cancer update, Evolution, future, life, Money, Philosophy, technology. Bookmark the permalink.